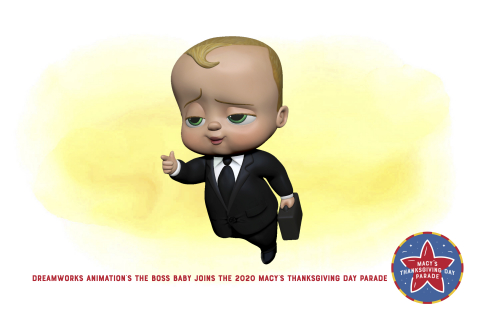 NEW YORK--(BUSINESS WIRE)-- The world’s most famous mini-mogul takes flight this November as The Boss Baby, the title character from the upcoming DreamWorks Animation movie The Boss Baby: Family Business, debuts in the 94th Annual Macy’s Thanksgiving Day Parade®. The holidays officially begin on Thursday, November 26, 2020, live from 34th Street, as the annual holiday spectacle rings in the season of joy. While more than 50 million viewers gather at home to watch the celebration unfold on NBC, it will be all business for The Boss Baby, as he transforms into a giant character balloon for his first flight in front of Macy’s famed flagship store at Herald Square in New York City.

“We can’t wait to see The Boss Baby take flight for his first Thanksgiving Day mission bringing smiles to the faces of millions of viewers nationwide,” said Jordan Dabby, producer of Macy’s Thanksgiving Day Parade. “Although it’s a holiday, The Boss Baby will be all business, sporting his signature black suit and carrying a briefcase, letting everyone know who’s in charge.”

The Boss Baby is the fifth DreamWorks Animation character balloon to appear in the Parade. Over the years, the Parade has featured balloons from the studio’s Shrek, Kung Fu Panda, How to Train Your Dragon and Trolls franchises. “The annual Macy’s Thanksgiving Day Parade is a beloved American tradition and an indelible American treasure, and we are delighted to celebrate it with families across the country again this year,” said David O’Connor, Executive Vice President, Head of Global Franchise Management, Brand Marketing and Partnerships, Universal Pictures. “The Boss Baby knows how to take charge better than anyone, and we can’t wait for families across America and the world to see him rule the New York City skyline on Thanksgiving Day.”

Designed by the artists of Macy’s Parade Studio, the adorable suit-wearing, briefcase-carrying Boss Baby will debut in the Thanksgiving Day celebration transformed into a 32-feet long, 28-feet wide, 48-feet tall giant balloon. With his trademark grin and in-charge attitude, the pint-sized mogul will make a big impression on spectators from coast-to-coast.

The Boss Baby: Family Business, in theaters March 26, 2021, is the sequel to the Oscar®-nominated blockbuster comedy that earned more than $500 million worldwide. In this new film, the Templeton brothers —Tim (James Marsden) and Boss Baby Ted (Alec Baldwin)—have become adults and have drifted away from each other. But a new boss baby with a cutting-edge approach and a can-do attitude is about to bring them together again … and inspire a new family business. The film also stars Jeff Goldblum, Eva Longoria, Ariana Greenblatt, Amy Sedaris, Jimmy Kimmel and Lisa Kudrow.

About The Boss Baby: Family Business:

In the sequel to DreamWorks Animation’s Oscar®-nominated blockbuster comedy, the Templeton brothers—Tim (James Marsden, X-Men franchise) and his Boss Baby little bro Ted (Alec Baldwin)—have become adults and drifted away from each other. Tim is now a married dad. Ted is a hedge fund CEO. But a new boss baby with a cutting-edge approach and a can-do attitude is about to bring them together again … and inspire a new family business.

Tim and his super-mom wife Carol (Eva Longoria) live in the suburbs with their super-smart 7-year-old daughter Tabitha (Ariana Greenblatt, Avengers: Infinity War), and super-cute new infant Tina (Amy Sedaris, Netflix’s BoJack Horseman). Tabitha, who’s at the top her class at the prestigious Acorn Center for Advanced Childhood, idolizes her Uncle Ted and wants to become like him, but Tim worries that she’s working too hard and is missing out on a normal childhood.

When baby Tina reveals that she’s—ta-da!—a top secret agent for BabyCorp on a mission to uncover the dark secrets behind Tabitha’s school and its mysterious founder, Dr. Armstrong (Jeff Goldblum), it will reunite the Templeton brothers in unexpected ways, lead them to re-evaluate the meaning of family and discover what truly matters.

Building on the success of the first film, which earned more than $500 million worldwide, The Boss Baby: Family Business is directed by returning filmmaker Tom McGrath and is produced by Jeff Hermann (Kung Fu Panda 3).

DreamWorks Animation (DWA), a division of the Universal Filmed Entertainment Group, within NBCUniversal, a subsidiary of Comcast Corporation, is a global family entertainment company with feature film and television brands. The company’s deep portfolio of intellectual property is supported by a robust, worldwide consumer products practice, which includes licensing, and location-based entertainment venues around the world. DWA’s feature film heritage includes many of the world’s most beloved characters and franchises, including Shrek, Madagascar, Kung Fu Panda, How to Train Your Dragon, Trolls and The Boss Baby, and have amassed more than $15 billion in global box office receipts. DreamWorks Animation’s television business has quickly become one of the world’s leading producers of high-quality, animated family programming, reaching consumers in more than 190 countries. Creating a diverse array of original content in a variety of formats and delivering deep, fully immersive worlds served up with compelling characters, the prolific studio has garnered 25 Emmy awards since inception in 2013.