Olay Faces the STEM Gap: Olay Is the First Skincare Brand to Debut a Float in the Annual Macy’s Thanksgiving Day Parade® 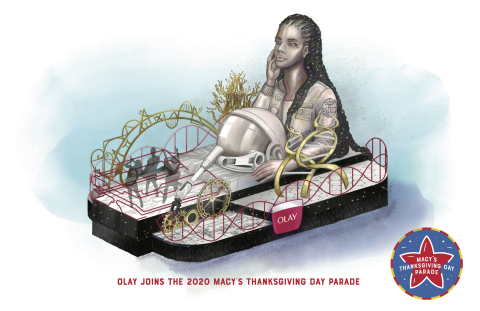 NEW YORK--(BUSINESS WIRE)-- This November, millions of girls and women will be motivated to Face the STEM gap as Olay debuts its first float in the Macy’s Thanksgiving Day Parade®. Today, women make up only 24 percent of jobs in STEM fields. Olay wants to play a role in changing that. It’s Olay’s 10-year brand mission to #SolveTheSTEMGap.

On Thursday, November 26, Olay will encourage women all over the world to Face Anything as the Her Future is STEM-sational float takes to the streets of New York City live from 34th Street, exciting more than 50 million viewers nationwide and reminding them of the importance of maximizing women and their accomplishments.

"We love the tradition of the Macy's Thanksgiving Day Parade -- the kickoff to the holiday season, and because it is something that brings the whole country and families to watch together,” said Chris Heiert, Senior Vice President of Olay. “Last year, Olay announced our brand purpose to make space for women in STEM during the Super Bowl, one of advertising's biggest moments, because we wanted that message to reach as many consumers as possible. As we continue our mission to face the STEM gap, we saw the Macy's Thanksgiving Day Parade as another great, large scale opportunity to spread the message that women can face anything, and that we are here to support them in doing so."

The Her Future is STEM-sational float features visual representations of the core STEM fields of science, technology, engineering, and math. A double helix skates around the perimeter of a female astronaut’s galactic float, where a helmet is positioned as a nod to Olay’s #MakeSpaceForWomen campaign from February’s big game. A robotic arm acknowledges engineering. Mathematical symbols and computer codes climb across one half of the float, and technology is represented by the circuit tree found next to the astronaut. Science-packed with more than 60 years of Olay’s rich research and development, the symbolic Olay jar ties together the inspiring float.

“We are thrilled to welcome Olay to the magical roster of this year’s Thanksgiving celebration,” said Susan Tercero, Executive Producer of Macy’s Thanksgiving Day Parade. “This out of this world float will entertain millions of spectators nationwide as it inspires, educates and empowers a new generation to follow in these important STEM fields.”

In September 2020, Olay announced its 10-year commitment to double the number of women in STEM, and triple the number of multicultural women in STEM. Olay showcases that commitment with a beautiful woman as the star of its float, clad in a space-themed bomber jacket, as another nod to the brand’s out-of-this-world campaign at the start of 2020.

The Olay brand believes that women can Face Anything and has been spreading that motivating message since 2018 with the debut of their campaign by the same name at New York Fashion Week. Olay’s latest campaign reminds the world of the importance of maximizing women. Join Olay in helping women Face Anything and #SolveTheSTEMGap by visiting Olay.com/women-in-stem.

This is the first year of Olay’s participation in the Macy’s Thanksgiving Day Parade. The brand is excited to be the first-ever skincare brand to debut a float in the world’s most famous holiday event.

ABOUT THE MACY’S THANKSGIVING DAY PARADE:

For more than 90 years, the Macy’s Thanksgiving Day Parade has marked the official start of the holiday season. With more than 50 million viewers nationwide, the Macy’s Thanksgiving Day Parade is a national icon that has grown into a world-famous holiday event. Featuring Macy’s signature giant character balloons, fantasy floats, marching bands, clowns, celebrity and large group performances, and the one-and-only Santa Claus, the annual spectacle continues to bring families together to create cherished holiday memories. For more information on the Macy’s Parade please visit www.macys.com/parade. (NYSE:M)

Olay is a worldwide leader in skin care and has been trusted by women for over 60 years. Olay continues to hold to the philosophy it was founded on: to maintain a deep understanding of women’s changing needs and offer products backed by superior science that fit those needs. Female consumers have come to expect this superior product performance from Olay, as it brings healthy, beautiful skin to more than 80 million women on five continents.