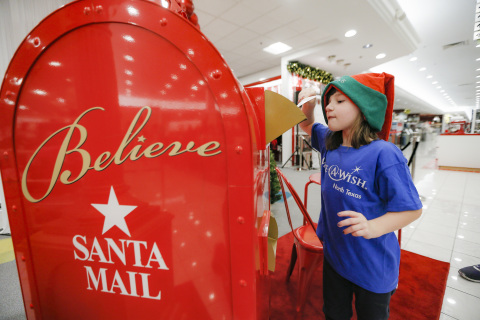 On Friday, December 7, Macy’s will help grant 25 wishes in 25 cities across the country and double its donation for each letter collected that day in-store or at macys.com/believe

NEW YORK--(BUSINESS WIRE)-- Macy’s (NYSE:M) will celebrate National Believe Day on Friday, Dec. 7 by doubling donations to Make-A-Wish® for each letter to Santa collected that day in stores or online at macys.com/believe. As part of the 11th annual Believe campaign, Macy’s will also mark this special day with the return of Wishes Across America, helping grant 25 special wishes for children across the country. The beloved Believe program helps bring joy to children with critical illnesses and this year, from Nov. 2 to Dec. 24, Macy’s has pledged to donate $1 to Make-A-Wish for each letter sent, up to $1 million. For National Believe Day, Macy’s will pledge an additional $1 per letter, up to an extra $1 million, above the existing $1 million campaign goal.

“National Believe Day brings our Macy’s colleagues and customers together to help celebrate the holiday season by giving back in a big way,” said Sam Harrison, vice president of giving and volunteerism at Macy’s. “This is one of most special days at Macy’s, where we focus on spreading the message of generosity and hope across the nation. It’s also when we generate excitement to double our donation to Make-A-Wish – meaning that Macy’s will donate $2 for every letter written, up to an additional $1 million, that day alone. On National Believe Day, we help to grant 25 special Wishes Across America in 25 cities. The amazing wishes bring unmatched joy and hope to children and families across the country, and Macy’s is thrilled to support such wonderful moments.”

Macy’s has donated more than $112 million to Make-A-Wish since 2003, including more than $17 million through its annual Believe campaign. These donations have helped grant more than 13,000 wishes, impacting millions of lives and communities. This year’s Wishes Across America, taking place on National Believe Day, will celebrate 25 wishes of all types, from having shopping sprees and makeovers to traveling to Hawaii, New York City and Paris, and singing on stage “to be a star.”

To generate even more excitement in stores on National Believe Day and as part of Macy’s 12 Days of Friends and Family activities, kids will be able to create winter works of art featuring Sunny the Snowpal at coloring stations located next to the Believe letterboxes and snap a photo at the Macy’s selfie wall.

Additionally, as an extra special treat for National Believe Day this year, the one and only Santa will be taking over Macy’s Twitter @macys to spread the message of love and generosity! Tweet with Mr. Claus and join in the fun on Dec. 7 using #macysbelieve. You can also check out Macy’s Instagram stories (@macys) to follow the excitement of National Believe Day including Wishes Across America, letter writing, double donations, and more. Macy’s has also teamed up with Giphy to create one-of-a-kind Macy’s Santa GIFs for fans to use across all social media platforms. These custom jolly GIFs allow everyone to continue spreading Christmas wonder all season long and can be found by simply searching “Santa” wherever GIFs are used across Facebook, Instagram Stories, Twitter, Messenger, and more.

The Believe campaign was inspired by the story of an 8-year-old girl, Virginia Hanlon, who wrote a letter to the New York Sun newspaper in 1897. Virginia asked the paper’s editor, Francis P. Church, if there really was a Santa Claus. “Yes, Virginia, there is a Santa Claus,” Church replied. “He exists as certainly as love and generosity and devotion exist." This iconic response illustrates the spirit of the Believe campaign, as well as the climactic National Believe Day.

Macy's, the largest retail brand of Macy's, Inc., delivers fashion and affordable luxury to customers at approximately 650 locations in 44 states, the District of Columbia, Puerto Rico and Guam, as well as to customers in the U.S. and more than 100 international destinations through its leading online store at macys.com. Via its stores, e-commerce site, mobile and social platforms, Macy's offers distinctive assortments including the most desired family of exclusive and fashion brands for him, her and home. Macy's is known for such epic events as Macy's 4th of July Fireworks® and the Macy's Thanksgiving Day Parade®, as well as spectacular fashion shows, culinary events, flower shows and celebrity appearances. Macy's flagship stores -- including Herald Square in New York City, Union Square in San Francisco, State Street in Chicago, Dadeland in Miami and South Coast Plaza in southern California -- are known internationally and are leading destinations for visitors. Building on a more than 150-year tradition, and with the collective support of customers and employees, Macy's helps strengthen communities by supporting local and national charities giving more than $52 million each year, plus 153,000 hours of volunteer service, to help make a difference in the lives of our customers.

Make-A-Wish creates life-changing wishes for children with critical illnesses. We seek to bring every eligible child’s wish to life because a wish is an integral part of a child’s treatment journey. Research shows children who have wishes granted can build the physical and emotional strength they need to fight their illness. Headquartered in Phoenix, Arizona, Make-A-Wish is the world’s leading children’s wish-granting organization, serving children in every community in the United States and in more than 50 countries worldwide. Together, generous donors, supporters, staff and more than 35,000 volunteers across the U.S., grant a wish every 34 minutes, on average, somewhere in the country. Since 1980, Make-A-Wish has granted more than 300,000 wishes to children in the U.S. and its territories; more than 15,400 in 2017 alone. For more information about Make-A-Wish America, visit wish.org.