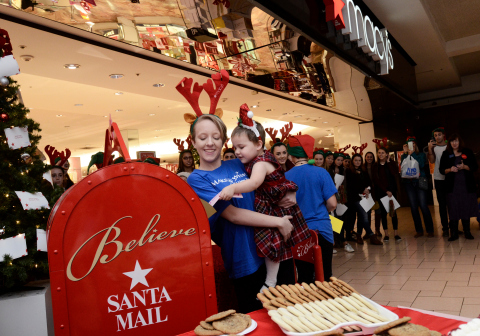 Macy’s beloved letter-writing campaign returns, with $1 donated to Make-A-Wish for each letter to Santa placed in the store’s red letterboxes or sent on macys.com/believe

NEW YORK--(BUSINESS WIRE)-- For the 11th consecutive holiday season, Macy’s (NYSE:M) is partnering with Make-A-Wish® for the annual Believe campaign, giving the gift of joy to children with critical illnesses. By sending a holiday wish list to Santa, shoppers can join Macy’s in celebrating the wonder of giving and help grant the wish of a child with a critical illness. More than three children are diagnosed with a critical illness every hour that Macy’s is open for business and a wish gives these children the physical and emotional strength they need to fight their illnesses. Macy’s will donate $1 to Make-A-Wish for each letter sent, up to $1 million, from Nov. 2, 2018, to Dec. 24, 2018. Customers can write their letters and drop them off in stores in the red Believe letterboxes or submit them online at macys.com/believe.

Since 2003, Macy’s has donated more than $112 million to Make-A-Wish, including more than $17 million through its annual Believe campaign, helping grant more than 13,000 wishes and impact more than 2.6 million people, including wish kids and their families, volunteers, community groups, nurses, doctors, and more.

“Believe is a special moment for the Macy’s family each year,” said Lauren Anania, Macy’s Director of Cause Execution. “As we celebrate the wonder of giving, we feel privileged to support Make-A-Wish in its quest to grant the wishes of children in need. We are proud of the passion that our colleagues bring and grateful to our customers for turning this program into a tradition of endless generosity and community through the collection of millions of letters over the last 11 years.”

“This holiday season we are, once again, inspired by Macy’s partnership and generosity through the Believe campaign,” said Janell Holas, Vice President of Brand & Marketing for Make-A-Wish America. “Macy’s makes it simple for everyone to make a difference in the life of a wish child by writing a letter to Santa. When you meet a wish kid, the transformative power of a wish is undeniable. Macy’s has seen this firsthand through the thousands of wishes they have helped to grant and they share our vision for granting the wish of every eligible child.”

Macy’s Believe campaign was born in the spirit of kindness and holiday goodwill, illustrated by the true story of 8-year-old Virginia O’Hanlon in 1897. Virginia wrote a letter to the New York Sun newspaper asking if there really was a Santa Claus. She received a spirited response from editor Francis P. Church that has since become an iconic piece of journalism history. “Yes, Virginia, there is a Santa Claus,” Church wrote. “He exists as certainly as love and generosity and devotion exist.” The Believe campaign seeks to capture some of the joy and generosity of Church’s words, bringing the magic of the holiday season to children across the country.

In addition to mailing your letter to Santa, find writing guides for teachers, the story of “Yes, Virginia,” local wish stories, and more at macys.com/believe.

Macy's, the largest retail brand of Macy's, Inc., delivers fashion and affordable luxury to customers at approximately 650 locations in 44 states, the District of Columbia, Puerto Rico and Guam, as well as to customers in the U.S. and more than 100 international destinations through its leading online store at macys.com. Via its stores, e-commerce site, mobile and social platforms, Macy's offers distinctive assortments including the most desired family of exclusive and fashion brands for him, her and home. Macy's is known for such epic events as Macy's 4th of July Fireworks® and the Macy's Thanksgiving Day Parade®, as well as spectacular fashion shows, culinary events, flower shows and celebrity appearances. Macy's flagship stores -- including Herald Square in New York City, Union Square in San Francisco, State Street in Chicago, Dadeland in Miami and South Coast Plaza in southern California -- are known internationally and are leading destinations for visitors. Building on a more than 150-year tradition, and with the collective support of customers and employees, Macy's helps strengthen communities by supporting local and national charities giving more than $52 million each year, plus 153,000 hours of volunteer service, to help make a difference in the lives of our customers.

Make-A-Wish creates life-changing wishes for children with critical illnesses. We seek to bring every eligible child’s wish to life because a wish is an integral part of a child’s treatment journey. Research shows children who have wishes granted can build the physical and emotional strength they need to fight their illness. Headquartered in Phoenix, Arizona, Make-A-Wish is the world’s leading children’s wish-granting organization, serving children in every community in the United States and in more than 50 countries worldwide. Together, generous donors, supporters, staff and more than 35,000 volunteers across the U.S., grant a wish every 34 minutes, on average, somewhere in the country. Since 1980, Make-A-Wish has granted more than 300,000 wishes to children in the U.S. and its territories; more than 15,400 in 2017 alone. For more information about Make-A-Wish America, visit wish.org.