POCKET.WATCH PARTNERS WITH MACY’S TO CREATE THE FIRST EVER YOUTUBE-INSPIRED BALLOON IN THE ICONIC HOLIDAY EVENT WITH CREATOR AND KID STAR RYAN of “RYAN’S WORLD”

Watch Red Titan from “Ryan’s World” take to the sky in New York City in the Macy’s Parade live from 34th Street – Thursday, November 26, on NBC from 9 a.m. – Noon, in all time zones 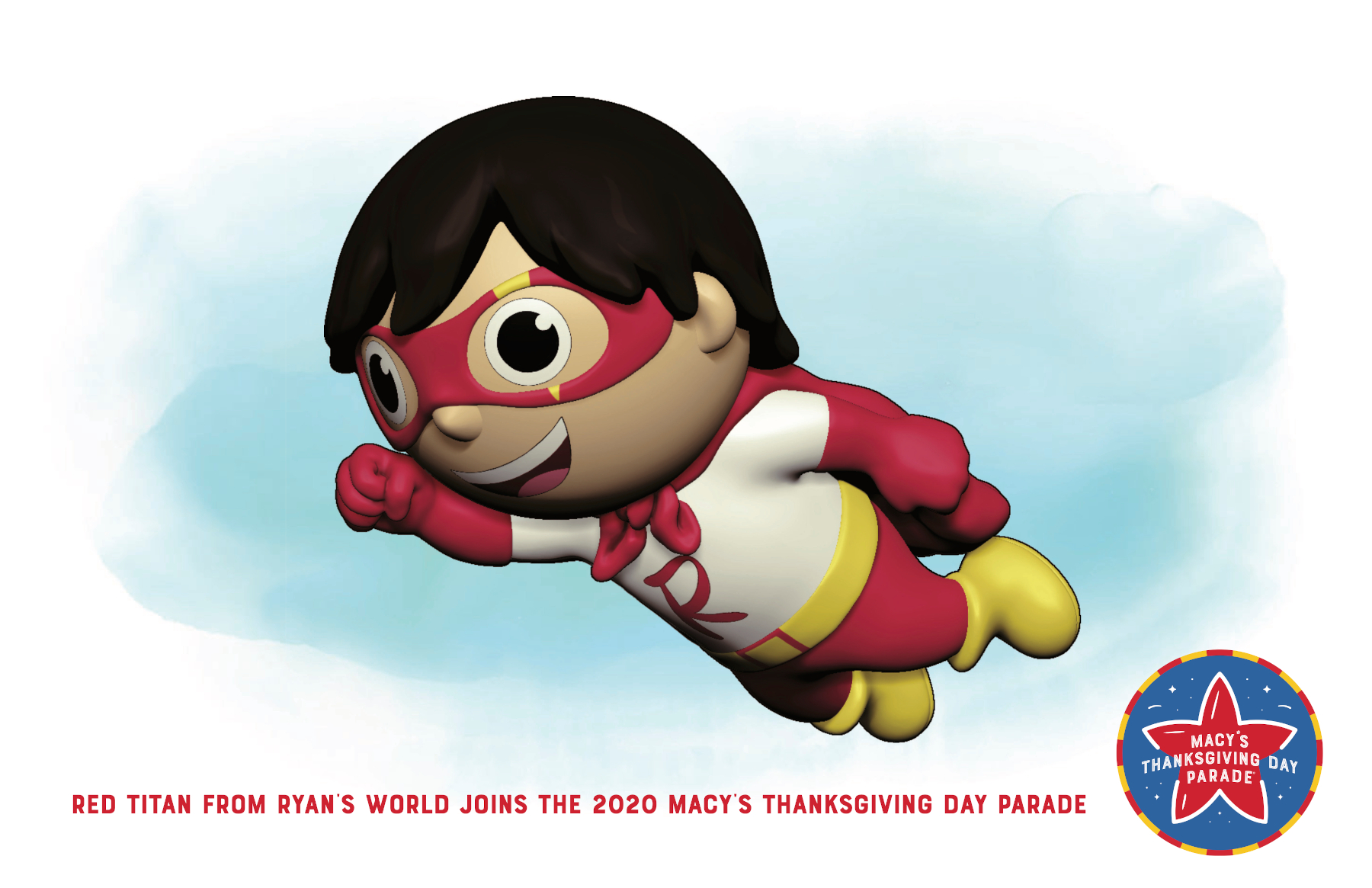 LOS ANGELES -- OCT. 29, 2020 -- Pocket.watch, the studio behind global franchises from the YouTube stars and characters loved by Generation Alpha, today announced that one of the newest giant character balloons in this year’s Macy’s Thanksgiving Day Parade® will be inspired by top YouTube star Ryan of Ryan’s World (40.2 million subscribers). Based on his popular alter ego, “Red Titan”, Ryan will be the first YouTube creator to be featured in the storied celebration’s 94-year history. Red Titan will take flight live from 34th Street, on Thursday Nov. 26, in New York City and will be broadcast on NBC.

“We’re thrilled to make history with the Macy’s Thanksgiving Day Parade, bringing the most popular kid in the world together with one of the most anticipated holiday events of the year,” said Kerry Tucker, CMO of pocket.watch. “Our goal is to bring kids more of what they love, especially during these challenging times. Kids adore Red Titan so we are proud that he will take his rightful place in the sky in this iconic Parade. Pocket.watch has created a lot of “firsts” for YouTube creators, but this one feels larger than life.”

Red Titan, along with all the characters of Ryan’s World was created by Ryan’s father, Shion and his production company, Sunlight Entertainment.

“We are thrilled to welcome Red Titan to the Macy’s Parade balloon lineup this year,” said Jordan Dabby, producer of Macy’s Thanksgiving Day Parade. “The giant balloons in the Macy’s Parade have always featured the most recognized characters in the world, and with the reach of Ryan’s World on YouTube, we are sure that millions of viewers will be delighted to see Red Titan fly this Thanksgiving.”

Designed by the artists of Macy’s Parade Studio, the masked Red Titan balloon will debut in the Thanksgiving Day celebration transformed into a 51-feet long, 28-feet wide, 42-feet tall giant balloon. The news was unveiled on the Ryan's World YouTube channel to over 40 million subscribers and includes behind-the-scenes videos of the making of the Red Titan balloon (HERE).

Pocket.watch is a new studio that specializes in entertaining and inspiring kids and families through digital-first content and sparking their imaginations with lifestyle products ranging from toys to toothbrushes. The company inspires kids to seamlessly move between screen time and playtime and boasts a growing portfolio of franchises that includes some of the largest kids and family YouTube brands in the world. Pocket.watch is the exclusive studio partner for the Ryan's World franchise and created and produces the Emmy-nominated television series Ryan's Mystery Playdate, which airs on Nickelodeon and is the #1 preschool show on television. Pocket.watch's newest brand, Love, Diana, based on the #3 YouTube channel in the world, Kids Diana Show, debuts in October 2020. The company was founded in March 2017 by Chris M. Williams and is located in Culver City, CA where it maintains an office and studio. Its management team is made up of studio veterans and visionaries from traditional and digital entertainment including Albie Hecht, Stone Newman, Jon Moonves, Kerry Tucker and David B. Williams. Investors include Viacom, Greycroft, Third Wave Digital and United Talent Agency (UTA), as well as notable strategic angels including Robert Downey Jr. (Team Downey) and Jon Landau. For more information about pocket.watch, please visit pocket.watch.