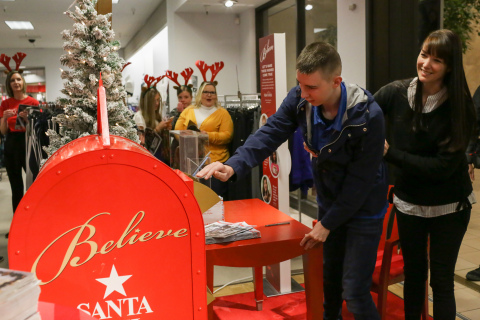 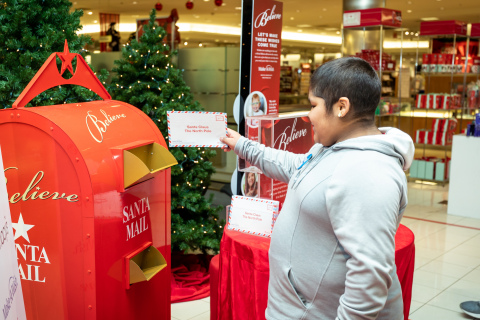 On Friday, December 6, Macy’s stores will host letter writing events across the country and double its donation to Make-A-Wish for each letter collected that day

Believers of all ages can send letters to Santa in store or online at macys.com/believe and deliver wishes to children with critical illnesses

NEW YORK--(BUSINESS WIRE)-- Macy’s will celebrate National Believe Day on Friday, Dec. 6 by doubling donations to Make-A-Wish® for every letter to Santa collected in stores or online at macys.com/believe that day and hosting letter writing events in stores across the country.

Macy’s 12th annual Believe letter writing campaign seeks to capture the joy and generosity of the holiday season by asking the community to come together to help grant wishes for children with critical illnesses. From Nov. 4 through Dec. 24, 2019, Macy’s has pledged to donate $1, up to $1 million, to Make-A-Wish for each letter collected in-store or submitted online at macys.com/believe. On National Believe Day, Macy’s will double its donation to Make-A-Wish, pledging $2 for each letter collected, up to an extra $1 million, above the existing $1 million campaign goal, to help children’s life-changing wishes across America come true.

“Each year, we’re in awe of the outpouring of support for the Macy’s Believe campaign on National Believe Day,” said Sam Di Scipio, Macy’s senior director of corporate communications, giving and volunteerism. “It’s a remarkable day as communities across the country and customers of all ages work together to help Macy’s raise another $1 million for Make-A-Wish in one single day. Just imagine how many wishes that grants and how many smiles it will bring to children battling critical illnesses.”

To help Macy’s reach its extra $1 million goal on National Believe Day, dozens of Macy’s stores are partnering with their local communities to host letter writing events. From local school groups and organizations to celebrity influencers and sports personalities, communities nationwide will come together to write their letters to Santa in honor of National Believe Day and help more life-changing wish experiences come true.

This year, Macy’s Santa will again take over @macys Twitter account in celebration of National Believe Day! Fans of Saint Nick can tweet with him from 11 a.m. ET to 6 p.m. ET on Friday, Dec. 6. Does Santa prefer cookies or carrots? Find out from the man himself on National Believe Day. Follow #MacysBelieve to share in the excitement of Macy’s Believe campaign, including wish granting, letter writing, double donations, and more.

Since 2003, Macy’s has donated more than $122 million to Make-A-Wish, including more than $19 million through its annual Believe campaign, helping grant more than 14,500 wishes and impact nearly 3 million people, including wish kids and their families, volunteers, community groups, and medical professionals, among others.

In addition to mailing a letter to Santa, more information on the campaign, including writing guides, local wish stories, and more, can be found at macys.com/believe.

In celebration of National Believe Day, select Macy’s stores will host letter writing events including the locations listed below: