Bloomingdale's Marks its 150th Anniversary with a Celebration Like No Other

This September, the iconic retailer will kick-off its milestone celebration with exclusive product collaborations, one-of-a-kind consumer experiences, special events across the country, and much more

NEW YORK, June 8, 2022 /PRNewswire/ -- Bloomingdale's, the renowned retailer and American icon, announced today its 150th Anniversary campaign, a multi-faceted celebration that will launch this September. For one and a half centuries, Bloomingdale's has been a New York landmark and pioneer of the modern retail experience. Later this year, the innovative retail leader will pay homage to its 150th with a celebration like no other. 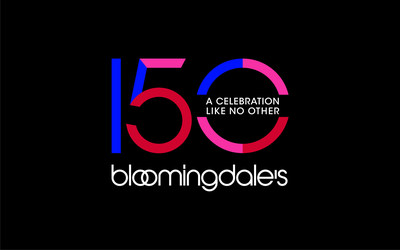 "This significant milestone represents a unique moment in Bloomingdale's rich history to not only celebrate our heritage, but to also look ahead to our next chapter," stated Tony Spring, CEO, Bloomingdale's. "Some of fashion's best brands started here, trends have been ignited here, and discoveries are made here every day. Bloomingdale's has always been a brand that inspires, bringing people, style, culture, and technology together. It's like no other store in the world, and will continue to be so for decades to come."

Some of the many special initiatives that will debut later this year as part of the dazzling 150th Anniversary celebratory campaign include:

"From the world class collaborations to innovative new experiences, our 150th is all about celebrating with, and also giving back to our customers, colleagues, partners, and everyone who has been a part of making Bloomingdale's the icon it is today," said Frank Berman, EVP and CMO, Bloomingdale's. "Together, we'll inspire the next generation of shoppers through the creative and captivating Bloomingdale's lens. You only turn 150 once, and this monumental celebration will be one of the biggest and brightest moments in our company's history to-date."

Additionally, Bloomingdale's will be announcing new partnerships, alliances and company innovations that will shape the company as it enters its next era later this year.

Bloomingdale's 150th Anniversary campaign celebrations will kick-off this September during New York Fashion Week and continue through the end of 2022. More information and additional details regarding all special anniversary campaign programming will be announced later this year.

Bloomingdale's is America's only nationwide, full-line, upscale department store. A division of Macy's, Inc., it currently operates 33 Bloomingdale's stores and 21 Bloomingdale's, The Outlet Stores, in California, Connecticut, Florida, Georgia, Hawaii, Illinois, Maryland, Massachusetts, New Hampshire, New Jersey, New York, Pennsylvania, Texas, and Virginia, along with 1 Bloomie's location in Virginia. In addition, Bloomingdale's has an international presence with a location in Dubai. Founded in 1872, the iconic retailer is celebrating its 150th anniversary this year. Be sure to follow @bloomingdales on social media, become a Loyallist, and for more information, or to shop any time, visit www.bloomingdales.com