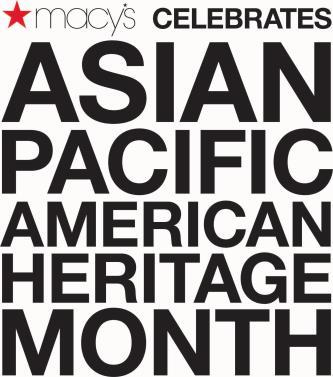 Acclaimed Asian Pacific American actors and comedians including Ronny Chieng and Jimmy O. Yang from the hit feature film “Crazy Rich Asians” to share their stories of how comedy has helped them impact Asian American culture

Macy’s Asian Pacific American Heritage Month in-store celebrations will include comedy performances, meet and greet opportunities and moderated discussions with featured comedians on the importance of their heritage and its specific influence on their comedic careers in the entertainment industry. These stars and supporting actors of well-known comedies bring their humor in-store for special conversations on the impact their work has on the next generation and how their culture and traditions helped them get to where they are today.

“At Macy’s, our commitment to diversity isn’t just one of our core values – it’s engrained in our company culture,” said Jose Gamio, Macy’s senior director of Multicultural Community Engagement. “Macy’s believes that different cultural perspectives help drive creativity and innovation and we’re thrilled to welcome this impressive lineup of Asian Pacific American actors and comedians to our stores as they share their unique stories of achievement with our customers and the communities we serve.”