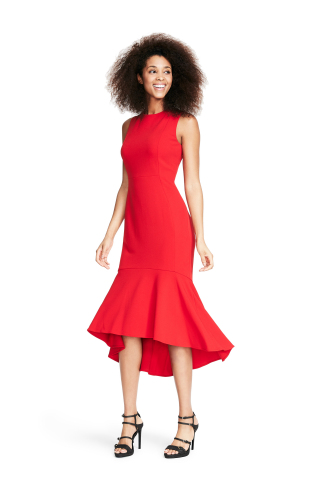 NEW YORK--(BUSINESS WIRE)-- Macy’s and the American Heart Association’s Go Red for Women movement have teamed up this February, American Heart Month, to raise awareness about the importance of physical activity to women’s overall health, and to provide easy, accessible tools and resources to inspire women to get active. Macy's has raised more than $69 million for Go Red for Women since the movement was launched in 2004, and every dollar raised helps fund lifesaving research and awareness that adds more time to women’s lives.

Throughout the month of February, Macy’s will give colleagues and shoppers the opportunity to help raise awareness and funds in a variety of ways.

Through Macy’s charitable round-up program, Make Good Cents, customers are invited to round up their in-store purchase to the nearest dollar (up to $.99) and donate their change to Go Red for Women from Friday, Feb. 1 through Thursday, Feb. 28. Funds raised will be used to support education, resources and tools for women to improve their health and well-being through physical activity.

Merchandise That Gives Back

Throughout the month of February, 10 percent of the purchase price of Macy's exclusive red dress will benefit Go Red for Women. The limited-edition dress, by Calvin Klein ($119), will be available in select stores and on macys.com/GoRed.

“Through Macy’s commitment to supporting women’s heart health, we have contributed more than $69 million to Go Red for Women since 2004,” said Sam Harrison, vice president of giving and volunteerism at Macy’s. “As the number one killer of women, this cause is near and dear to our hearts, affecting customers and colleagues in our local communities. By providing different ways for our customers to give back, together we are helping women of all ages and backgrounds live longer, healthier lives.”

As a platinum sponsor of the American Heart Association’s Go Red for Women Red Dress Collection, Macy’s helps shine a spotlight on the issue of heart disease in women. The Red Dress Collection has kicked off New York Fashion Week since 2003 and will be staged this year on Thursday, Feb. 7 at 8 p.m. at The Hammerstein Ballroom in New York City. The star-studded event will feature strong and inspiring female celebrities, as well as Macy’s own colleague and heart disease survivor, Emily Straley. These powerful women will walk the runway in gowns created by both world-renowned and up-and-coming designers. Two of the red dresses featured on the runway will be created by designers in fashion incubator programs, which are housed at Macy’s locations and develop the next generation of fashion trendsetters. The designers-in-residence featured are Madelange Laroche from Philadelphia Fashion Incubator and Rakan Shams Aldeen from Chicago Fashion Incubator.

Macy's, the largest retail brand of Macy's, Inc. (NYSE:M), delivers fashion and affordable luxury to customers at approximately 650 locations in 44 states, the District of Columbia, Puerto Rico and Guam, as well as to customers in the U.S. and more than 100 international destinations through its leading online store at macys.com. Via its stores, e-commerce site, mobile and social platforms, Macy's offers distinctive assortments including the most desired family of exclusive and fashion brands for him, her and home. Macy's is known for such epic events as Macy's 4th of July Fireworks® and the Macy's Thanksgiving Day Parade®, as well as spectacular fashion shows, culinary events, flower shows and celebrity appearances. Macy's flagship stores -- including Herald Square in New York City, Union Square in San Francisco, State Street in Chicago, Dadeland in Miami and South Coast Plaza in southern California -- are known internationally and are leading destinations for visitors. Building on a more than 150-year tradition, and with the collective support of customers and employees, Macy's helps strengthen communities by supporting local and national charities giving more than $52 million each year, plus 153,000 hours of volunteer service, to help make a difference in the lives of our customers.